Floated the PM on Saturday evening from M-37 to Green Cottage. Traffic was lighter and I expected and the fish were abundant. We spent some time looking for trout behind the spawning salmon with no luck. We targeted the salmon the remainder of the evening and each landed a couple.
Sunday morning was 24 degrees cold. We launched the drifter at Bowman's Bridge for a long float to Sulak. We had never fished this stretch of river before so we were excited to see some new water. The first hour of the float was unproductive with no gravel and very limited deep holes. It was shallow, sand, and lots of timber. As we approached McDougal's launch the river started to look much more like the PM we are used to fishing. The gradiant was steeper and there was quite a bit of gravel with many deep runs. This would definately be some great winter steelhead water.
We spoke with another couple guys and they said you can launch at McDougal's for a $5 fee. Its a private launch.
We began to see some more signs of life and caught a few nice salmon throughout the day. Again, I was suprised at the limited amount of traffic on the river.

Dusty with a nice salmon on the fly. 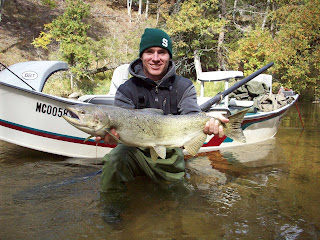 And one of mine. 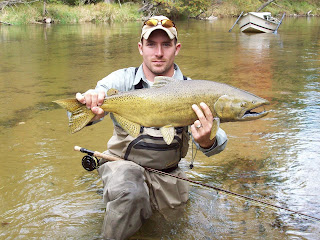