Steelhead fishing on the Pere Marquette with Johnny this weekend. Floating bait was the method of choice for the weekend. Today we launched at MacDougals and would end at Rainbow Rapids. I remembered many good looking winter steelhead haunts while floating this section of river with Dusty during the salmon season. Around noon I hooked and quickly lost a small steelhead. At the bottom of the pool Johnny hooked another steelhead and the battle was on! After a few minutes, the fish made a run for a log jam and broke off. We both got a good look at the fish and were bummed! Trout fishing picked up in the afternoon and I schooled Johnny by landing around 25 trout to his 5. He now calls me the trout whisperer!

Awesome colors on this PM Brown! 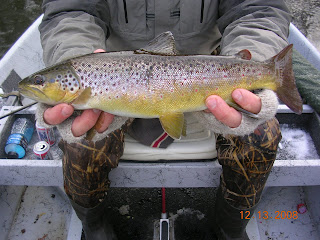