Headed north this morning to a favorite river in the Upper Peninsula. Armed with a wallet of T14 sink tips and a box of streamers it was going to be a full day swinging flies with the spey rod. To make this as painless as possible, I'll spare the majority of the details. 9 hours later we had a handful of solid grabs between the two of us. I had 2 in 2 casts...a little on the slow side. We ended up with 2 small skips. Bank talk with the locals confirmed that mature fish have been at a premium of late. Even the centerpin boys were hurting for chrome. 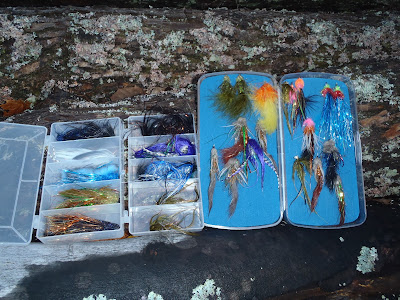 By the end of the day, my flies looked as whooped as I did!
The highlight of the day was meeting two young boys around the age of 12.  They were elated to find out they out fished us.  To prove it, one boy lifted a very rotten salmon from the inside of his backpack, yes, backpack.  "Look what I caught!" he yelled, confirming his angling superiority.  He later let us know that he wasn't going to actually eat the fish, just take it home to make "spawn packages".