Again, a huge lack in posts around here.  Centerpin Kyle has been tied up with school and I've been extremely busy with a new job, moving, and house shopping.  Anyhow, there appears to be a light at the end of the tunnel and I found some time to fish a local SW Michigan trout stream this evening.  Its a familiar place, since I caught my first fly rod trout here many years ago.  I also posted my first blog post after fishing here in Janurary over 3 years ago.

SW Michigan isn't known for producing trophy trout.  Not that you can't stumble upon a giant pushing the 2 foot mark, but it usually doesn't happen.  Go north for the big boys.  12 inchers are solid fish down here and you must adjust your expectations accordingly.  That being said, I've spent plenty of days on the AuSable and went home with a picture or two of a 12 inch trout!

Its been warm the last few days, over 80 degrees.  Rexman has been talking of the huge hennie hatches up north, so I thought tonite may provide some hatch activity.  I haven't fished many hatches down here, so I was a little surprised when there really weren't any big bugs to speak of on the water.  A few caddis and of course the friendly black flies.  A hendrickson dry quickly produced this healthy brown, despite the lack of bugs on the water. 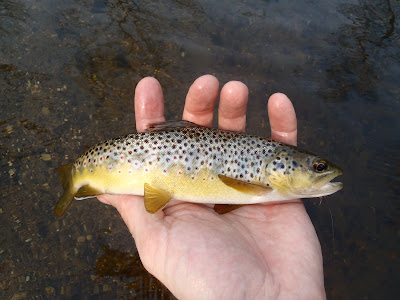 Working my way upstream, I came across a ledge of rocks creating a hole which looked to be 2-3 feet deep.  ﻿I began fishing the tailout and noticed a bigger trout actively taking bugs on top.  After about a dozen drifts he crushed my fly and I briefly hooked up.  Definitely a solid fish and I know where he lives for next time! 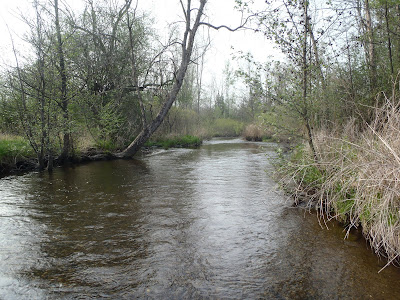 I continued to fish upstream and hit a dry spell.  Tried a couple other bugs with no luck.  Finally tied on a Royal Wulff attractor with a #16 copper john dropper in a last ditch attempt.  Almost immediately I hooked, landed, and released 2 browns on the Wulff and another on the copper john.  Why would they attack the gaudy attractor fly and not the hendrickson?  Hell, I don't know.  I went home having hooked up with over a half dozen trout on a weeknight in SW Michigan, can't complain about that! 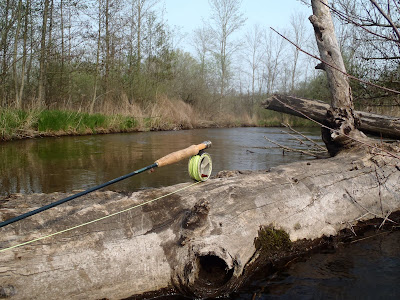