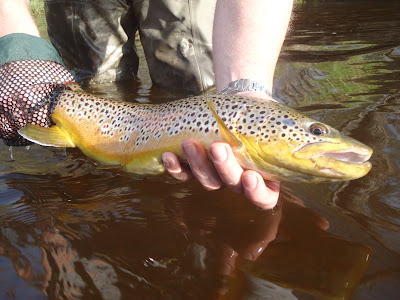 Spent the weekend chasing trout on a couple famous Northern Michigan trout streams.  The plan was to chuck streamers all day and spend the evenings stalking giants while they sipped hennies in the film.  Friday went as planned when Dustin stuck the pig in the picture above on a streamer.  I followed up with an 18" chunk of brown trout on a dry fly that flopped out of the boat just in time to avoid being photographed.  Great night.

Saturday we fished hard, floating over 16 miles of river while tossing streamers.  We had clouds, falling pressure, cold beer, everything was perfect for streamer fishing.  Except the bite.  We struggled to move fish regardless of the fly, retrieve, and/or location.  Just a slow day.  Dustin stuck the brown pictured below and saved the day.  It was the only attention we received from a mature fish in 10 hours. 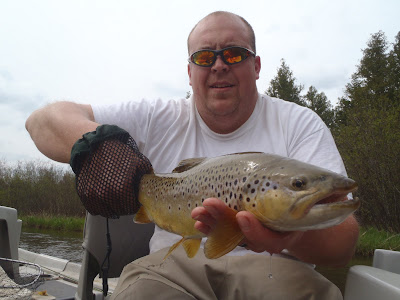 Sunday morning I fished on foot and decided to try nymphing, despite the small trout rising to a morning caddis hatch.  I was able to walk into a stretch of water that we say a big fish rising to bugs the night before.  I meticulously fished the run with several patterns, but wasn't able to get the big guy to bite.  Caught a handful of smaller trout on a gorgeous stretch of river.