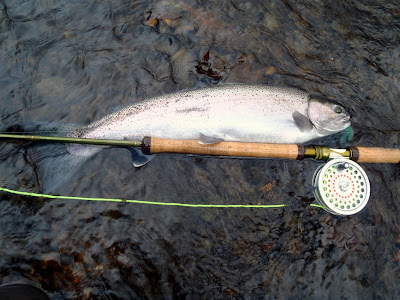 Finally switched one of my spey reels out for an old Hardy Marquis Salmon 1.  No drag, just a solid clicker, palming rim, and classic looks.  After filling it with backing and a skagit head, I had to hear this baby sing.  The steelhead didn't give up easy, but I coaxed this chunky hen into taking a blue marabou spey in my last run of the afternoon.  Thanks for the bugs Kyle!

I fished some bigger water Sunday.  I was pleased to see the water is up a bit since my last trip here during Salmon season, but its still very low for this time of year.  The water is always colored, and 2-3' of visibility is relatively clear.  I haven't swung a steelhead on this river yet, and decided to start out with a black/blue marabou spey.  There is something about the water color here that just messes with my mind.  Most of the river looks the same and the only way to uncover the sweet spots is to fish it hard and pay attention to the clues.  The river current is also slow, making is a less exciting place to fish.  However, it does get a decent run of steelhead.  Mid morning came and went, no grabs.  I picked up a float rig and put the hammer down on the buck pictured below shortly afterwards.  Not a big fish by any means, but one of the best fighting steelhead I have caught in a long time.  Truly an awesome battle.  Although I was happy watching this great steelhead swim away into the green water, I couldn't help but think about how this fish would have slammed a spey fly.  There's just nothing like the tug of a steelhead, and I'm not going to give up so quickly next time. 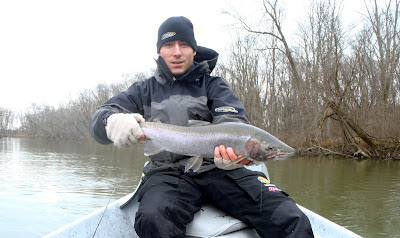